Artemis Grey
I am currently in the process of trying to secure a literary agent. In the meantime, I'm writing like crazy and trying to learn something from every experience, the good and the bad.

Attempting a Change In Habits

I know. I know. I did it again. I was gone forever, popped back in with *awesome* news, and was all 'gushy gushy' and then I disappeared.

Besides the whole contract excitement, life has been super busy recently. Not bad busy, just super busy. I went to Sirens (of course) and for the first time ever, my sister aka Stella Luna, went with me!!! She had a great time, especially when our super amazing and awesome/friend/basically family Hilary, whom I go and stay with (along with her daughters) and camp with, was able to stop by, sneaking into the hotel lobby to surprise ambush Stella Luna and I for a day of adventure visiting the elk rut in Estes CO. All in all, it was a grand trip.

Since we've been back from Sirens, I've had more developments with my upcoming book. I don't want to give away too much, but suffice to say I have, thus far, been immensely blessed throughout this process. Immensely. I can't say that enough. Thank you for everything so far, and everything to come in the future, Stephanie, and the Clean Reads team!!!

I've also been dealing with... stuff I won't get into because, TMI, and while I don't care what people know, I don't want to gross anyone out. I'll leave you with one word to google: endometriosis (possibly, working on diagnosis now) and this ominous threat that my Mother has often (jokingly) used on my father 'You know what'll happen if you're not a good boy? When you die, you'll come back here as a woman!' Which, I should make clear, my Mom loves being a woman, and my Dad is not one of those 'Oh, get over your discomfort, already.' type of guys when it comes to repro stuff, but this is a longstanding joke, and one to which he always responds by saying 'No, I'm good. I'll leave the hard stuff to the people who can handle it.' I love my parents.

On top of all that, I've also been working on two WIPs, one a prequel to CATSKIN, the other an entirely new endeavor, adult fantasy, which was born of several conversations that took place at Sirens. Only at Sirens can you come out of things with ideas based off an agent who wishes she'd see more 'older women' protagonists, and musings over just *why* there is such a stigma in regard to 'crazy cat women' and why they're never considered to be capable women.

So, with life not really getting any slower, but the importance of having an online presence greater than ever, I've decided to try actually scheduling blog posts, and, after the fashion of Kristin Cashore, structuring them to be more like glimpses into how things are going, with sprinkled bits of information about everything, but not necessarily a single theme that requires the entire post. Make sense? We'll see!

Posted by Artemis Grey at 9:41 AM 9 comments

Big Book News!!! After a Rather Long Absence....

Well, I'm writing a post I've wondered sometimes - over the years - if I would ever write. I'm absolutely ecstatic to announce that my novel Catskin has been contracted for publication by Clean Reads, formerly Astraea Press! *And there was much rejoicing*

Anyone who's friends with me on Facebook or follows my blog will know that I've always envisioned myself as having an 'old school' sort of route to publication, agent first, then publishing, all that. However, the truth is, I have an excellent support system of family who are knowledgable in meaningful ways (IT brother in-law, etc.) and two amazing critique partners, Christi Corbett and Margo Kelly. Christi is a Clean Reads author herself, so I've gotten to watch her own journey to publication with them, which provided me with a wonderful insight into how they work, and how they care about their authors, and their authors' careers. I trust them. So I submitted to them, and subsequently, I've signed a contract with them. *pinches self to check that this is real*

After a long string of 'almost' rejections (and some amazing feedback from one agent, without which Catskin would not be the book it is now) I took a step back and looked at my life, and realized that basically, I was doing what I've often joked about, and likened to Drew Barrymore's Never Been Kissed prom scene. I was standing on a curb holding a sign that said 'Please believe in me and my writing' and waiting there, frozen, until someone came along who would, and who would then take me across the street, where we would meet someone else to say they believed in me and my writing and help me publish a book, and introduce me to more people, and so on and so forth. I was waiting, convinced that I needed to meet all of these people in a specific order, when really, I was perfectly capable of crossing the street and meeting all kinds of people, in call kinds of order, all on my own.

Don't get me wrong, I'd still love an agent, and might well get one in the future. But the thing is, I was waiting to start a journey because I'd convinced myself that I had to start it in a specific way. This is something Christi and I have talked about before. I just needed to get to a place where I could embrace 'stepping out into traffic' to begin the journey on my own. And here I am.

If you haven't heard of Clean Reads, here are a few links. Check them and their authors out! Maybe buy a few books while you're there...

Their Publisher's Marketplace info can be found here.

Predators and Editors readers voted them one of the top E-publishers here.

And here's an interview with Stephanie Taylor, founder of Clean Reads, from 2011. Some of the information is dated, but it'll give you a great overview of what their about.


In a world of 'edgy' fiction, wherein you'll find every curse word known to society and more varieties of sex than you could ever imagine, Clean Reads provides readers with great stories without all the cursing and sex. Now, I come from a long line of Navy folk, with potty mouths the likes of which would make landlubbers melt into their shoes, and I'm not one to shy away from sex, either. However, I do believe strongly that it's becoming more a 'thing' to have in books, than it is a part of a book. When I look back at the books I still love years on, books that I still reread, most of them do not, in fact, have a lot of cussing in them (besides Stephen King:) nor do they have gratuitous sex. It's perfectly fine to have those things in books, but it's also very nice to have great stories without the cussing and sex.

Catskin, for example, naturally didn't have a ton of cursing, and no sex. That's just how it came out of me. However more than once, it was suggested that I 'dirty it up' a little with love triangles (that were unneeded) or language to 'make it more realistic' which is something that really bothered me. A good story doesn't need these things unless they add to the story. There are thousands of amazing people out there who don't cuss, and they're very real. I've got friends who write erotica. I've read plenty of erotica. Same with cussy books. There are some very cussy characters whom I love. I'll always stand by the right to cuss! However, it's just not always needed. And when I pick up books off the shelf and encounter a plethora of curse words within the first few pages, well, they aren't books I want my niece reading, and while she's just five, she's already had Tolkien, among others read to her, and she's going to be a voracious reader. I want books that she can read, and enjoy, and remember at a young age, without having to explain what curse words mean, or vetting the books for sex scenes.

So, here we are. I have a contract to publish a book. (!!!) I'll post more as timelines are firmed up, but sometime in 2016, summerish, Catskin will be here!

Okay, back to pinching myself to make sure this is real...

Author Page! And Other Stuff...

I officially made and official Author Page over on Facebook. I'm not sure this was the right thing to do, since I don't have any books out (besides the poetry anthology, Poetry Pact 2011, which you can buy here, if you like poetry. It's modest, but has come great poets (not me) involved, and poems that range from complex to Byron and Frost-type (me) and is a fun read) out but since so many submissions ask about Author pages and how many followers one has, and so on and so forth, I thought I ought to have an official page. At the very least, I can try to start accruing followers and such. If you're feeling kindly, please go here, and follow me.

The 'other stuff' is mostly just musing about how difficult it is to keep writing sometimes. Not difficult as in, you've got writer's block, or anything like that, but difficult as in, you've got so many stories in your head that want to be written, but you don't know which one should be the next one. There are so many options here, and I find myself flickering back and forth between several. Currently, it's between A Life Once Borrowed, which is a contemporary (with magical elements, though just how much magical elements is still unclear) inspired by the Scottish ballad, The Daemon Lover, and a completely new WIP, tentatively titled The Weight of a Shadow, which is much more fantasy. I'm also continuing to plug along with the Castalia memoir, and the super secret project.

Also, it's always interesting to find out that you were walking around with an injury you didn't know you had. Since I'm now off the blood thinners, I've finally gone to PT for what we thought was rhomboid pain, which has been causing me an increasing number of severe headaches. After initial treatment of the rhomboid and neck issue my PT guy traced the origin of the trouble back to a lump that I've had for about seven years, since a tragically clumsy 'almost' fall in the shower. Turns out that lump, is not one, but two torn muscles, which have subsequently scared and developed adhesions to the structures around them. Nice. On the upside, at least we discovered this now, as opposed to five or ten years from now, at which point, there might not be a way to fix things. And my shoulder is healing. I'll have PT for another couple of weeks but already the torn area is beginning to resolve and the lump is less than half the size it was.

And, because life is always better with old lady cats, here's a random photo of Face, who often sits with me while I'm writing. A fitting copilot when I'm working on the Castalia memoir. 17 years young, she is. And still death to any mouse she sees, as well as random feet. 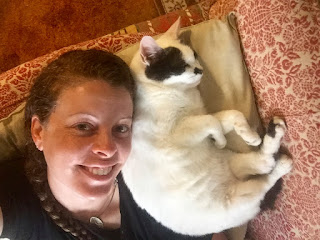 Posted by Artemis Grey at 9:42 AM 4 comments